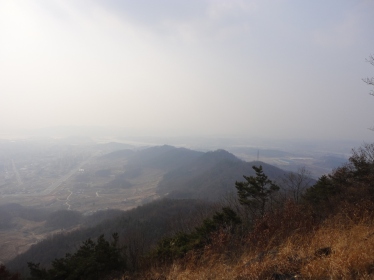 View, looking west, of the ridge north of Chungju; taken from Gye Myung San, NE of Chungju itself.

Two years ago today I lived in Korea–in a small city named Chungju. Almost exactly in the middle of South Korea, it is flanked on its north, east, and south with mountains. And I mean immediately flanked–I could walk out of my apartment building and be hiking within 10 minutes. This was one of my favorite things about living in Korea: I would generally go on a hike every week or so; it was basically a mini-vacation from work and the city that I could take whenever I wanted. I could spend an hour up there, or a whole day. I could get into the silence and be among the trees and really get into nature without having to plan it at all. It was glorious.

One year later I was back in Richmond, VA. There aren’t any mountains near Richmond, but the city itself is full of parks and has the James River running right through it–and a state park along both banks of the river. So, if you live near downtown, you are never more than a few miles from a forest. It’s a small forest, granted, but an honest-to-God forest nonetheless, and there’s a large, unoccupied island, and a river full of smaller islands–all covered with trees. Again, living there, I could just walk out my door, hop on my bike and be out-of-the-city–while still in the city–in just a few minutes. And again, I would avail myself of this resource at least once a week. Indeed, last summer I was out in the parks or at the river almost every day reading or just walking.

Now I live in Manhattan. From the beginning I was less than enthusiastic about living here–it’s so densely crowded, almost every inch covered in concrete (which is itself often covered in dog shit or garbage–or both). Every direction you walk, there are people, and more people, a never-ending crowd of people. There’s nothing wrong with these people, but there are just too many of us packed into one space. The few available strips of trees or grass are a) also covered in people, because these bits of land are such a rare and valued commodity and/or b) right next to the West Side Highway, and thereby very loud, un-soothing places.

I had noticed, when I first arrived, that the relative lack of really large stretches of virgin nature was stressing me out. Over the winter, I had decided that I had gotten over this and adjusted to Manhattan life. But now, with the trees blooming and the grass stretching up to the daily-higher sun, I’m itching to get back out into the fresh air. The problem is that there really isn’t any fresh air here to speak of.

But school will be over in a few weeks and I should be back in Richmond in June. Although I’ll be back up here in August as school starts again, I’m already looking forward to some quiet streets and some forested places not filled with people, to the smell of soil and the sound of cicadas. I’m not writing this to complain about Manhattan–I know lots of people love this place. But I’m really feeling my separation from nature these days and noticing how it’s beginning to depress me again. I’m ready to take a break from this city.

Also: hopefully, once school is over I will actually start to write on this blog with some regularity again. These past few months, school has pretty much monopolized my brain power; but I’m hoping to post about twice weekly over the summer. So if you like reading about systematic theology, congratulations! The internet will have slightly more of that starting in June.